Officers at Mashava Police Station are in a quandary as suspects arrested for various crimes are refusing to be detained in one of the holding cells claiming it is haunted.

It is said suspects who spent a night in the cell raised alarm after they were terrorised by what they claimed to be “strange creatures and evil spirits”.

Authorities have since responded by installing lights in all cells at the station. Still, fears abound the strange occurrences might continue.

“We have, however, already taken steps to remedy the situation.

“A pregnant woman committed suicide in the cell in the 1990s.

“That is where the fear stems from,” he said.

“Tererai Mukomondo, a gold panning suspect, who was later acquitted, claimed to have seen the apparition.

“I was the only one in the cell after being arrested on allegations of gold panning. An effigy of a ‘shiny’ woman stood right in the middle of the cell in the dead of the night,” he said.

“I thought I was dreaming. However, I realised I had seen a ghost when reality set in.”

Tinashe Kwashirai, once arrested on allegations of public violence, claims to have witnessed strange happenings. “I was once detained there with other suspects.

“When we woke up the following morning, we were all sleeping on the floor.

“The blankets were neatly folded and tucked in one corner of the cell.”
Posted by Odette H Lind at 10:21 PM No comments:

The Spook House in Harare 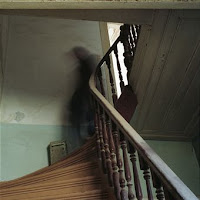 At last we visited the Spook House - now a pub and restaurant.
I felt nothing in the atmosphere at all!
The stories go (and thee are two of them) that a young girl child died tragically in an upstairs room and that her ghost haunts it - it is said that someone spent the night there a few years back and came out very sober the following morning.
the other story concerns a resident who had an argument with his employee - a shot was fired and the employee fell dead - are either story true - i really don't know but i want to return one evening as see if i can feel anything - ghosts don't always manifest during the brightness of day
Posted by Odette H Lind at 2:55 AM 1 comment:

FELUNA NLEYA
HARARE - Feb 18 2011 18:39
A strange-looking object, believed to be a goblin, became the centre of attraction for scores of Chitungwiza residents near Makoni Shopping Centre on Friday morning.
The goblin, which had a cone-shaped horn with what looked like human hair attached to it with red, black and white beads, was spotted by a woman who said she had gone to throw away rubbish at a nearby dump site.

According to the woman who claimed to have seen the goblin first, it was removed from a bag of mealie-meal by street kids.

“I was coming to throw rubbish away when I saw that thing (goblin) which street kids nearby said they had taken out of a 10kg mealie-meal bag as they wanted to use the mealie-meal to cook sadza,” the woman said. “That’s when I started calling people to come and see.”

A local man Rangarirai Mutomba emerged from the crowd and left people dumbfounded when he lifted the goblin and said such things were the source of suffering for a lot of people before ripping it apart and exposing its insides filled with reddish powder.

“People should not believe in these things. God is there and he is the only one who can answer your problems, no one else. I don’t know why people use these things because they do not work,” said Mutomba.
An eyewitnesses at the scene said: “It is an act of witchcraft used by many people thinking that they would be rich if they use those goblins. That’s why they keep them. But if you see it abandoned like this it would have become a problem to the owner.”
Mutomba said: “A lot of these things happen and the people never go far with them. Throwing it away like this means they couldn’t handle it anymore.”
Posted by Odette H Lind at 10:37 PM 1 comment:

STAFF WRITER
GOKWE - Feb 04 2011 20:12
A Gokwe man who was murdered by alleged Zanu PF activists two years ago is “refusing to be buried” amid mysterious circumstances.

The body of Moses Chokuda is still in Gokwe Hospital mortuary and his father, Tawengwa Chokuda, told NewsDay that his son was “fighting his own war”.

Chokuda’s father chronicled events that led to his son’s death at the hands of alleged Zanu PF supporters whose names he claimed were Farai Machaya — whom he said was the son of the Midlands governor Jason Machaya — and Edmore Gana, son of the Zanu PF district coordinating committee chairperson for Gokwe, Isaac Gana.

He said although it was almost two years since his death, his son’s corpse still appeared fresh.

He said he wanted 15 cattle as compensation before he could bury his son.

“The way he was killed was ruthless. He was beaten to death, tied with ropes and dragged like an animal. I think he is now fighting his own war,” he said.

Chokuda said police had tried to bury his son by force after he had refused to participate in the process but they failed to move the coffin out of the mortuary.

Police spokesperson Wayne Bvudzijena said the police were aware of the case but it was not their responsibility to bury people.


Chokuda said he was told by mortuary attendants at the hospital that sometimes they saw his son sitting on top of his metal coffin.
Recently, said Chokuda, his son’s corpse was said to have spoken to mortuary attendants who had brought the body of a victim of violence, advising them of the right place to put such bodies.
People in Gokwe who spoke to NewsDay last weekend corroborated Chokuda’s story saying countless efforts to have the deceased buried had failed due to various inexplicable occurrences.
They said a magistrate who had granted the accused persons bail when they first appeared in court had been affected by a mysterious mental affliction and is roaming the streets of Gokwe.
“The coffin did not move out when about 10 police officers tried to lift it out of the mortuary to bury him against my will and without my consent,” Chokuda said.
“My son is seen alive by those who are linked to his death,” he said.“I hear he (the dead man) is herding cattle belonging to one of the suspects at a farm,” said Chokuda.
Chokuda said he expected the people responsible for his son’s death to come forward and apologise with at least 15 cattle as compensation so that his son could rest.
“Don’t forget you cannot stop an avenging spirit by going to jail or through the courts. Even if you die, the rest of your family that remains behind will suffer from that avenging spirit,” he said.
The late Chokuda’s mother, Gertrude, who is blind, said she was angry and would remain burdened until the day her son “comes home to rest”.
“I am blind and it is painful to have a dead body in my house.
It’s very painful. I thought I had found an eye but ZanuPF did this to my son,” he said.
Posted by Odette H Lind at 10:37 PM 6 comments: