His Spirit Lived On 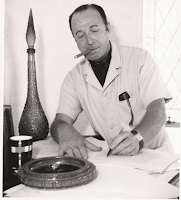 My father lived in a cottage in our garden for 9 years before his death. He was a constant pipe or cigar (when he could get them) smoker. He had a habit of banging his pipe on a glass ashtray to empty it and this gave out a very distinctive sound. He also watched TV - usually old films throughout the night - sleeping only about 4 hours a night.

Our bedroom looked over his cottage and we were able, when the wind was right and our window open, to hear the TV in the background and the pipe being emptied in the glass ashtray.

After his death we emptied the cottage and it stood empty for some months.

We continued to hear the TV and the pipe noise. The TV connection had been removed. There was no doubt about the sounds - we would wake and hear them distinctly.

A dear friend of ours was moving overseas and did not want to get rid of her lovely furniture so we invited her to put it in the cottage. We placed it so that it could be used.

From the day that the furniture was placed in my father's abode the mysterious sounds stopped and have not been noted since.
Posted by Odette H Lind at 2:02 AM No comments: