Witch hunter or not?

Fake goblins give away bogus Tsikamutanda
Chinhoyi Bureau - the Herald
TWO fake goblins left in the blankets in which a witch hunter — Tsikamutanda — was sleeping in, after allegedly exorcising a house in Banket have led to his arrest.
Morris Mbofana (24) is now facing three counts of fraud after allegedly approaching three people claiming that he could rid their houses of evil spirits.
He allegedly forced his victims to sign a piece of paper as proof that they had willingly paid him.
In the first incident, Mbofana went to Fatima Tauro’s house at Mimosa Farm in Banket and identified himself as a traditional healer who had come to exorcise the house of goblins.
She consented to his proposals to cleanse the house at a fee of US$7 and three chickens. He allegedly removed some hairy objects with beads from Tauro’s daughter’s stomach and another from a clay pot and told her that the objects were goblins.
Mbofana indicated that there was a major cleansing ceremony that required an ox as payment. He demanded two goats that he had seen in the pen before threatening her with serious harm if she failed to pay.
In the second incident, he approached Miriam Chiringidza on March 5 and told her that he wanted to remove evil spirits, which were haunting her father’s family.
They went to Chiringidza’s house where she indicated that she had brought a traditional healer to exorcise the house of evil spirits.
Her father was reluctant to pay the US$23 that Mbofana was demanding. However, his two daughters offered to pay the money. He allegedly removed a hairy object similar to the one he removed in the first incident. He, however, indicated that the money they had paid was not commensurate with the work he had done.
Mbofana demanded two blankets, 2kg flour, 4kg sugar, two bars of laundry soap and two 750ml bottles of cooking oil.
He allegedly threatened the family with harm if they failed to meet his demand.
He again forced them to sign a paper declaring that they had not been induced to pay him.

Witchcraft in a modern world.


By Walter Nyamukondiwa in Chinhoyi

A Chinhoyi woman recently died in mysterious circumstances after complaining of severe stomach pains and later acting like a fish before spending two nights in a bathtub filled with water.

Tamari Seremwa (37) of Kamedza Primary School in Gambura Village under Chief Magonde in Makonde District spent last Saturday night and the whole of Sunday in water.
She would intermittently gulp the water and then spew it out like a fish.
Hospital medical superintendent Dr Collett Mawire confirmed the strange incident.
She only came out of the tub after Chief Magonde reportedly summoned her to his homestead to discuss her predicament.
However, she did not make it as she died soon after being discharged from hospital.
Seremwa’s death has set tongues wagging over what really happened.
A woman who saw Seremwa when she was at the hospital said the latter had confessed to being intimate with a man who had been "fixed" by his wife. The practice is known as runyoka or "fencing" in many circles.
"She would say the man’s mother had warned her not to hang around the man indicating that he had been fixed with runyoka by his wife.
"She regretted not listening to the man’s mother," the woman said.
Seremwa, the woman said, was complaining of suffering from extreme heat and dehydration whenever she got out of the water.
Runyoka is a "safety lock" applied on both men and women to enforce fidelity.
It is said that a person "fences" his/her spouse so that they do not have sexual relations with another person. Indulging in intercourse results in inexplicable illnesses that normally lead to death.
A nurse at the hospital said: "We had to run around to get water after commiserating with the pain that she was going through.
"It was a strange sight that we failed to diagnose but we had to try but we had to help her all the same."
She said whenever water levels in the tub were low, Seremwa would splash water all over her body and writhe like a fish out of its natural habitat. At the time of writing, the body was awaiting a post-mortem.
"It is an issue with circumstances that we cannot really comprehend in medical terms but which has caught the attention of everyone," Dr Mawire said. 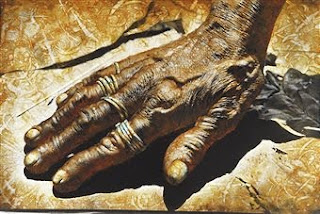 “When she came to barter with rural folk the trouble started. One of our neighbors requested [sugar] on credit and she refused. Before the end of the day she was bleeding from the nose, mouth and ears.”

In Zimbabwe, witchcraft is still common in rural areas. Hardly a week passes without a local report or newspaper story on the practice. For example, police recently cornered a man at the Mbare Mbare bus terminal, after they discovered a live cobra snake in his luggage. He told officers the reptile was one of his witching tools
About two weeks later, some women were discovered wandering naked in the early hours of the morning near Highfield. After being confronted by locals, they claimed they’d “flown” from a rural location during one of several night time escapades. But they said something went wrong and the spell wore off, before they could return to their original location.
Four years ago, the government proclaimed that supernatural powers do exist. But it says it still prohibits the use of magic if it harms someone.
Many Zimbabweans, especially those who grow up in rural areas, find it difficult to dismiss the existence of witchcraft. Tendai Manyimo,30, lives in Chitandara. He explained that his wife is a vendor and that her face became contorted after she was bewitched by rival vendors. He claims she’d been running a successful sugar sale venture:
“When she came to barter with rural folk the trouble started. One of our neighbors requested [sugar] on credit and she refused. Before the end of the day she was bleeding from the nose, mouth and ears,” he says.

Manyimo said a faith healer cured her.
David Nyemba, 77, from Mazhambe village believes he was bewitched by his aunt while he was employed as a driver in the city three years ago. He says a turning point came in his life when he quit his job in order to return to village life:
“I was the darling of the company management ,” he says, “and I did not realize I could have some hidden enemies.”
“My aunt pretended to like me and gave me money to spend. My instinct told me to refuse, but I went against my better judgment and spent it. I was demoted and harassed constantly by my superiors [which] never used to happen. I got the answers after visiting a traditional healer.”

Margaret Mashayamombe,83, is a traditional healer in Mutenda village, Chihota. She says witchcraft is used in families for revenge and spite.
Mashayamombe also says the frequency of recent reports on witchcraft indicates forces of good are triumphing over evil. She says Zimbabweans should respect traditions by performing rituals favored by their forefathers.
“Life was okay,” she asserts, “until some over-ambitious individuals went outside the country to get advice from traditional healers there on how to get rich quickly. That is where the problem began, because they came back with remedies that are harmful [to] others. All this is now being exposed due to the powers of the spirits of our forefathers.”
Sarudzai Nyota, 33, a member of the apostolic faith sect, says she believes the country would be better off without elevating the supernatural. Sarudzai says people should turn to God and seek salvation through Jesus Christ, as a way of overcoming being susceptible to witchcraft.
[Nyota says] The Christian church believes there’s only a “good” spirit, meaning what is called the Holy Spirit, whereas witchcraft has origins in Satanism.
Posted by Odette H Lind at 9:00 AM No comments: