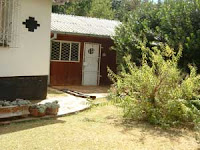 Our younger son has returned to stay here for a while and has removed most of the furniture we placed in the studio so that he has more room to work on a project he is engaged in finishing.
Yesterday about 2 in the morning I awoke to once again here the sound of old movies - I got up and wandered round the house thinking that someone had left a TV or a Radio on by mistake. Nothing!
I returned to our bedroom - which overlooks the Studio - and sure enough the faint sounds were coming from the studio! What will happen next!
Posted by Odette H Lind at 1:49 AM No comments: